ARLINGTON HEIGHTS, Ill., April 29, 2013 – New statistics released by the American Society of Plastic Surgeons (ASPS) show that arm lifts in women have skyrocketed a staggering 4,378 percent in just over the last decade.  It is a trend fueled, in part, by sleeveless fashions for women and more focus on strong-armed celebrities.  In 2000, more than 300 women got upper arm lift procedures.  Last year, more than 15,000 did.

Upper arm lifts can include liposuction or a surgical procedure known as brachioplasty, in which loose skin is removed from the back of the arms.

“Women are paying more attention to their arms in general and are becoming more aware of options to treat this area,” said ASPS President Gregory Evans, MD.  “For some women, the arms have always been a troublesome area and, along with proper diet and exercise, liposuction can help refine them.  Others may opt for a brachioplasty when there is a fair amount of loose skin present with minimal elasticity.”

Doctors say there is no single reason behind the increase, though celebrities from the White House to the red carpet may be having an influence.  A recent poll* conducted on behalf of ASPS found that women are paying closer attention to the arms of female celebrities.

According to the poll, women most admire the arms of first lady Michelle Obama, followed closely by Jennifer Aniston.  Actresses Jessica Biel and Demi Moore, and daytime TV talk show host Kelly Ripa also got votes for their toned arms.

“I think we are always affected by the people that we see consistently, either on the big screen or on TV,” said ASPS Public Education Committee Chair David Reath, MD, based in Knoxville, Tenn.  “We see them and think, ‘yeah, I’d like to look like that’.”

That’s just what happened to 24-year-old Natalie Robinson of Knoxville, who says she was inspired by the arms of the first lady.  “I looked at Michelle Obama and said ‘Oh my gosh, I want her arms.’  When I first started losing weight and started to tone up, I had her image in my head.”

That was three years ago.  Today, Robinson has lost more than 170 pounds and continues an amazing transformation through diet and exercise.  But for all the weight she’d lost, Robinson says she still wasn’t entirely happy.

“I had a lot of excessive skin around my upper arms,” she said.  “Every time I looked in the mirror there was a reminder of a heavier person and I just couldn’t get rid of it.”

That’s when Robinson contacted Dr. Reath, who performed her brachioplasty.  “Natalie had the perfect arms for this procedure,” said Dr. Reath, “but it’s not for everybody.”

A brachioplasty requires an incision from the elbow to the armpit, generally on the back of the arm, leaving a visible and permanent scar.  For Robinson, the scar was much easier to deal with than the excessive skin, but Dr. Reath cautions patients to carefully consider the pros and cons before having an upper arm lift, particularly a brachioplasty.

“It’s a trade off.  We get rid of the skin, but we leave a scar,” he said.  “So, as long as there’s enough improvement to be made in the shape of the arm to justify the scar, then it’s a great procedure.”

Dr. Reath stresses the importance of proper diet and exercise as part of a healthy lifestyle to all his patients, but says some women simply can’t achieve the look they want on their own.  Many who simply want to tighten and tone their upper arms, but don’t have a lot of excess skin, opt for liposuction instead of a brachioplasty.

“We are genetically programmed to have different accumulations of fat in different areas, and for some women the arms can be a problem area,” said Dr. Reath.  “The arms are a very noticeable area and if excessive fat and skin are an issue, they tend to look more out of proportion than the rest of the body.”

That was certainly the case for Robinson, but not anymore.  Robinson says she never expected surgery to make her arms perfect, just more normal.  “Well-proportioned is what I was going for, and I’m very happy.  It was well worth the investment,” she said.  “I would do it again.”

For more statistics released today on trends in plastic surgery including gender, age, regional, national average fees and other breakouts, refer to the ASPS 2012 National Clearinghouse of Plastic Surgery Procedural Statistics report at http://www.plasticsurgery.org/news-and-resources/2012-plastic-surgery-statistics.html. (Stats on this site will be updated with the specific demographics and trends when embargo lifts on 4/29/13).  Information about procedures and referrals to ASPS Member Surgeons can be found at www.PlasticSurgery.org.

* This poll was conducted online within the United States by Harris Interactive on behalf of the American Society of Plastic Surgeons from March 28-April 1, 2013 among 1,219 women ages 18 and older. This online poll is not based on a probability sample and therefore no estimate of theoretical sampling error can be calculated. For complete poll methodology, including weighting variables, please contact Shannon McCormick.

About ASPS: The American Society of Plastic Surgeons (ASPS) is the world’s largest organization of board-certified plastic surgeons.  Representing more than 7,000 Member Surgeons, the Society is recognized as a leading authority and information source on aesthetic and reconstructive plastic surgery.  ASPS comprises more than 94 percent of all board-certified plastic surgeons in the United States.  Founded in 1931, the Society represents physicians certified by The American Board of Plastic Surgery or The Royal College of Physicians and Surgeons of Canada.  ASPS advances quality care to plastic surgery patients by encouraging high standards of training, ethics, physician practice and research in plastic surgery.  You can learn more and visit the American Society of Plastic Surgeons at PlasticSurgery.org or Facebook.com/PlasticSurgeryASPS and Twitter.com/ASPS_News. 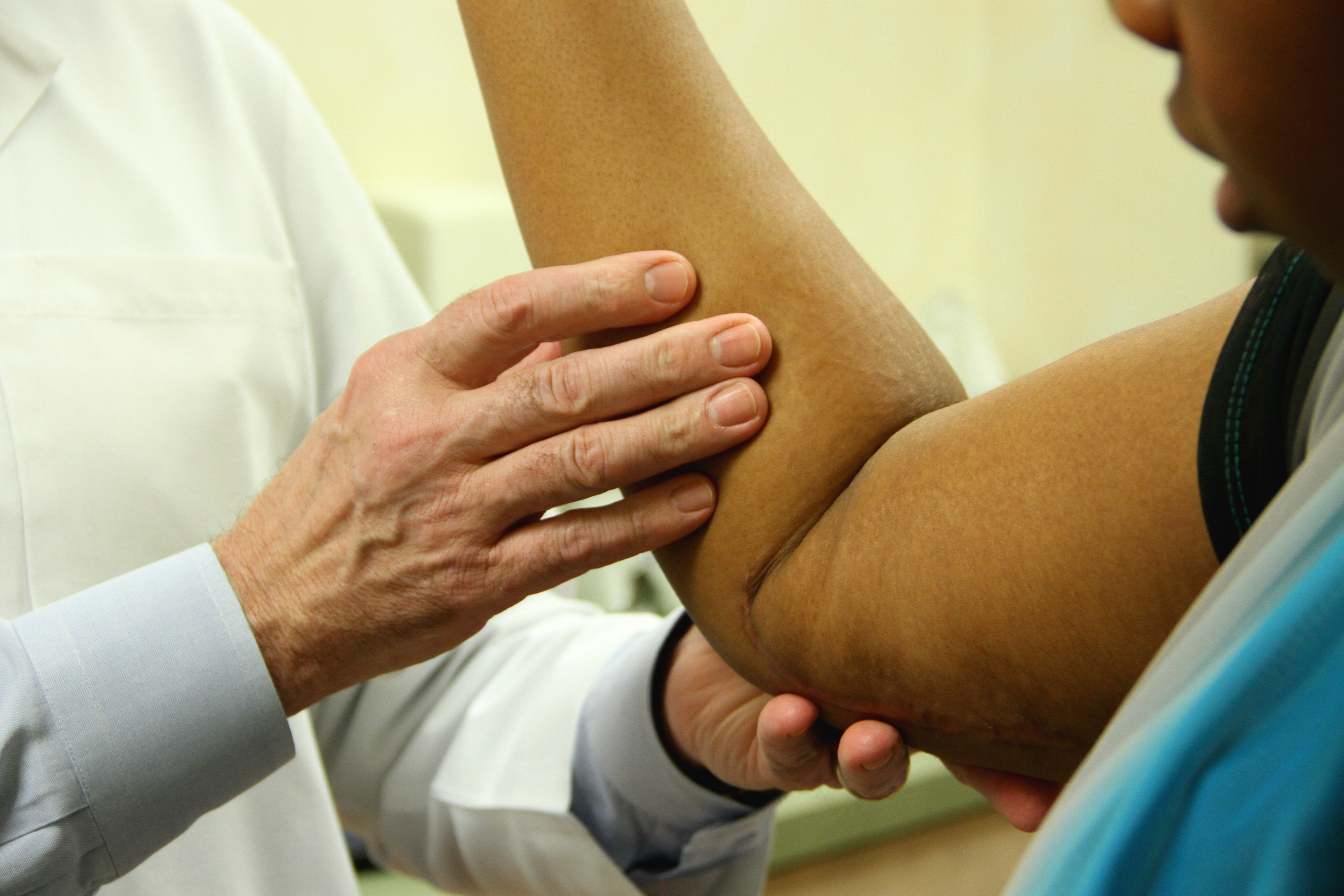 (from left) Dr. David Reath examines Natalie Robinson's scar post surgery. According to new statistics from the American Society of Plastic Surgeons, more women are undergoing brachioplasty to get rid of excess skin from their upper arms. 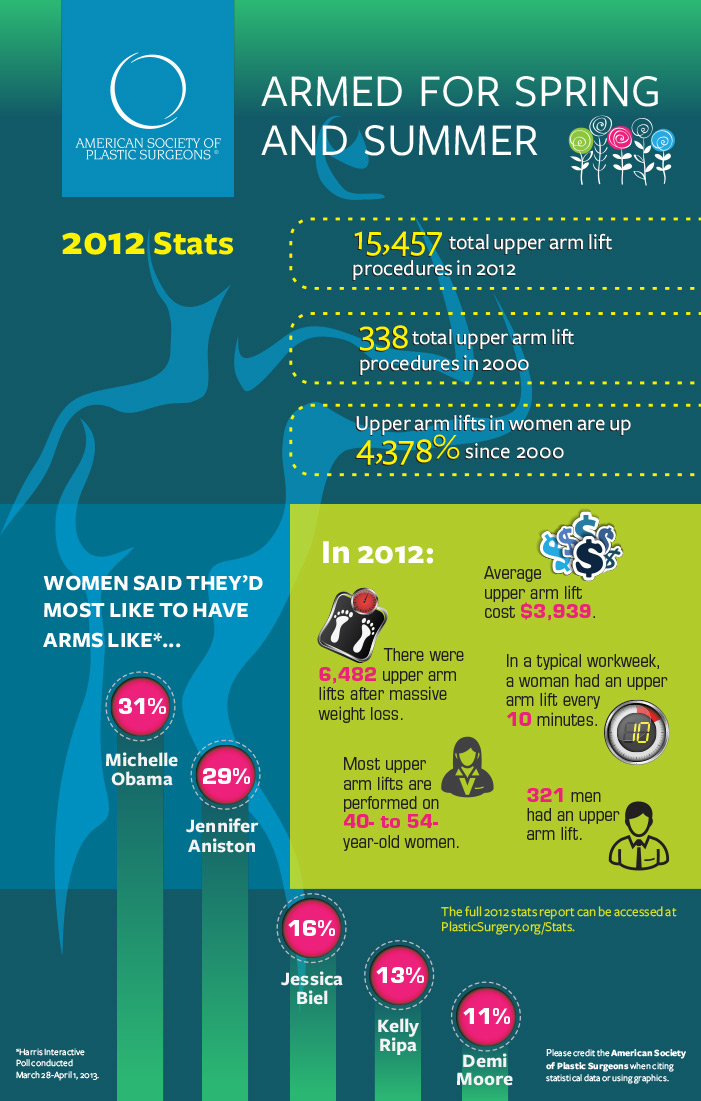 Armed for Spring and Summer 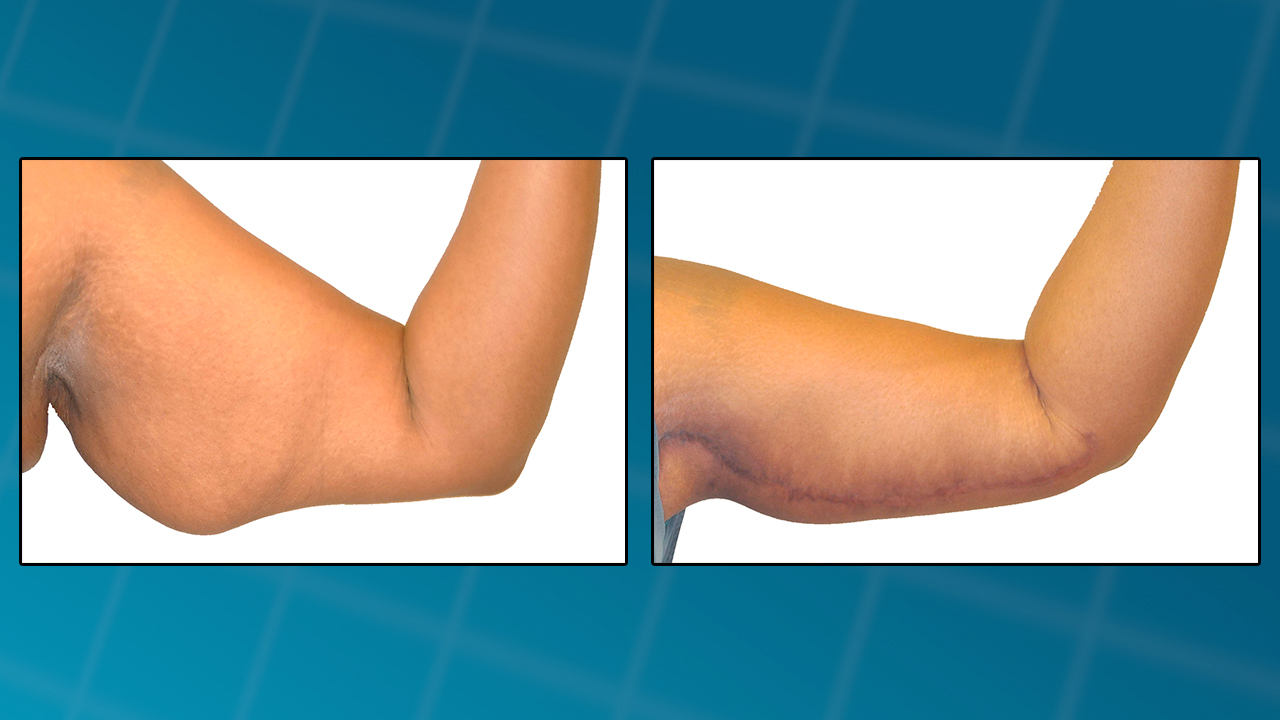 The before and after photo of Natalie Robinson's upper arm lift, performed by American Society of Plastic Surgeons member, Dr. David Reath. The excess skin is a result of a hefty weight loss that she struggled with. 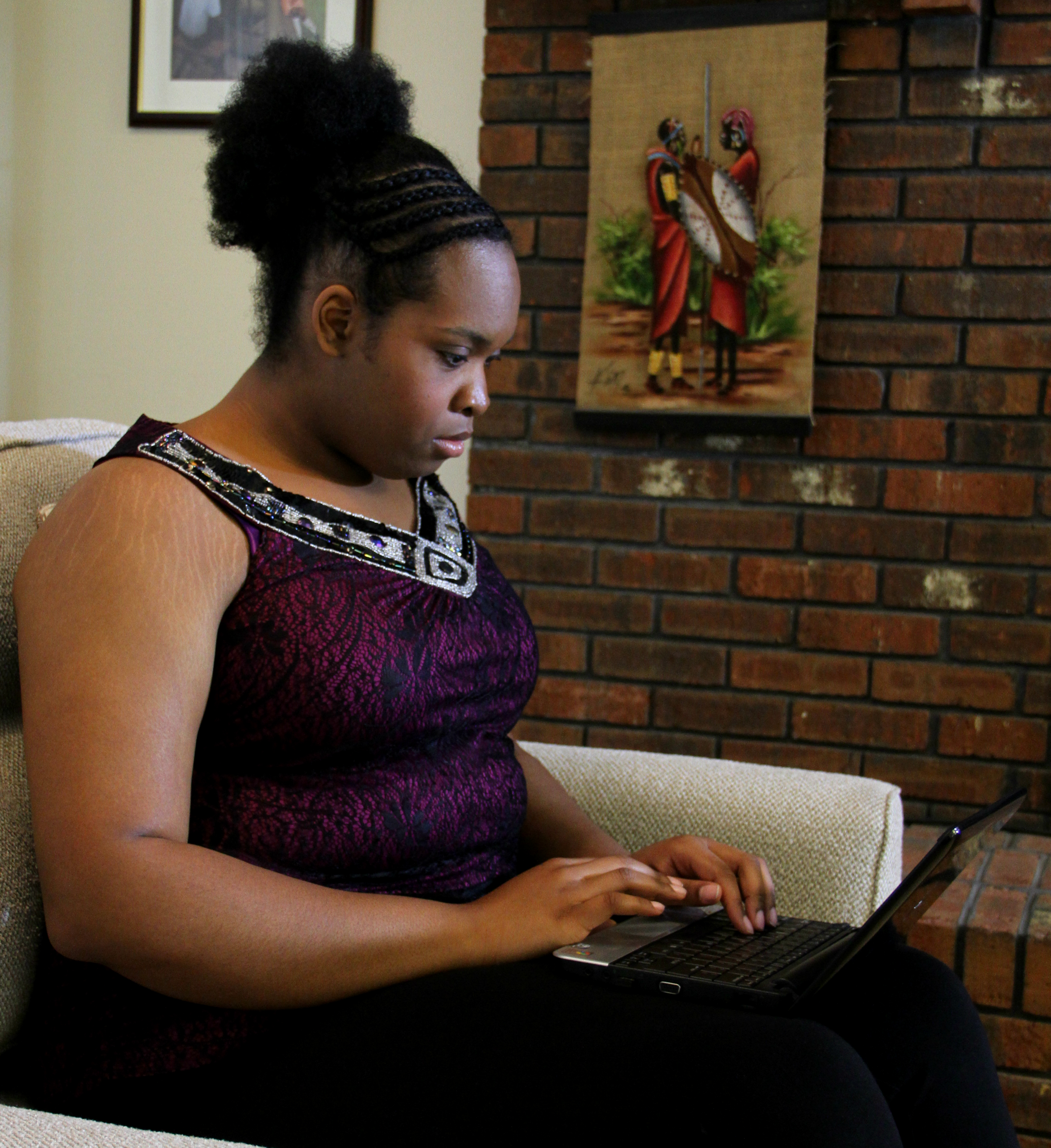 Natalie Robinson is now more comfortable in a sleeveless blouse after her upper arm lift. The American Society of Plastic Surgeons believe in part could be credited to popular sleeveless fashion. 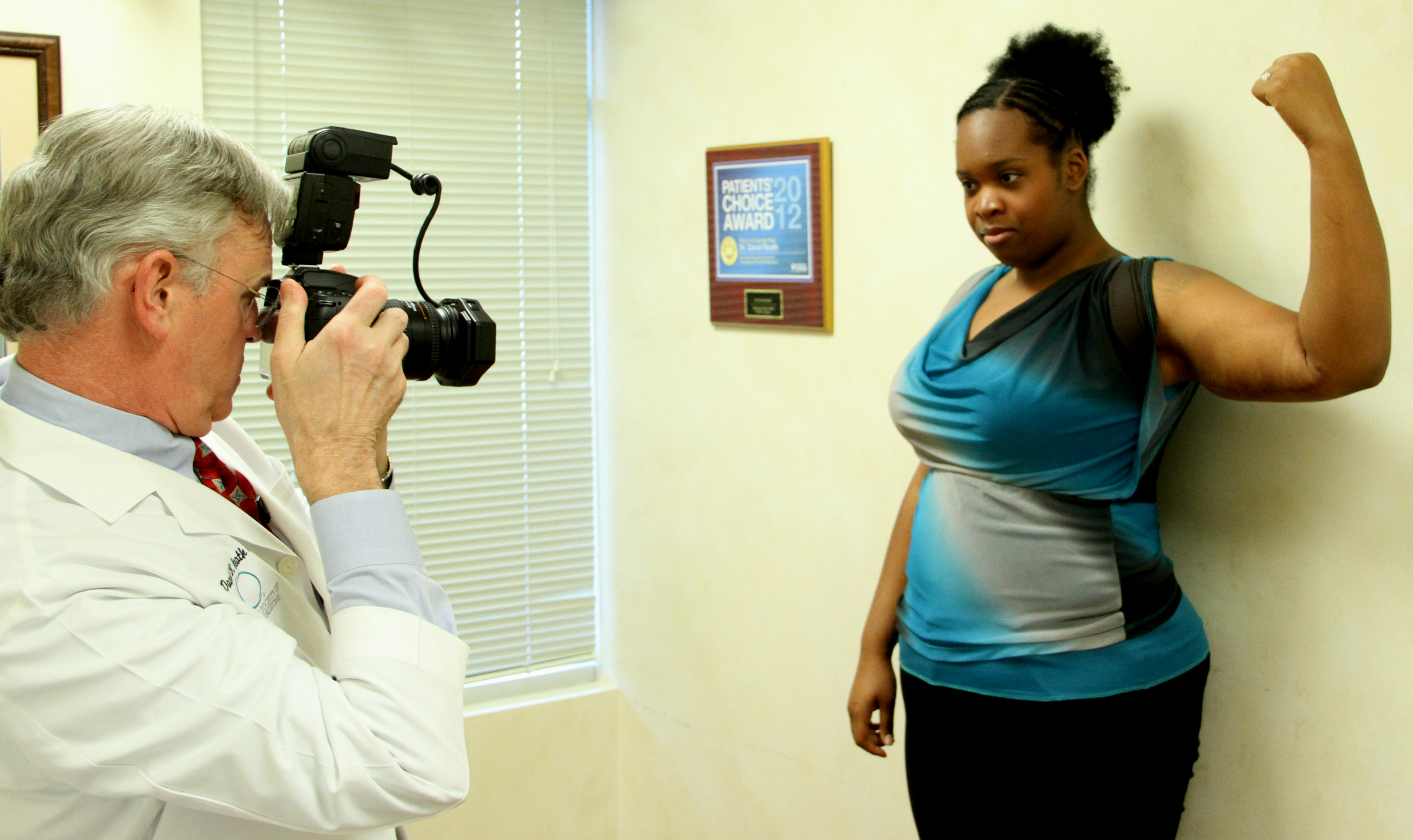 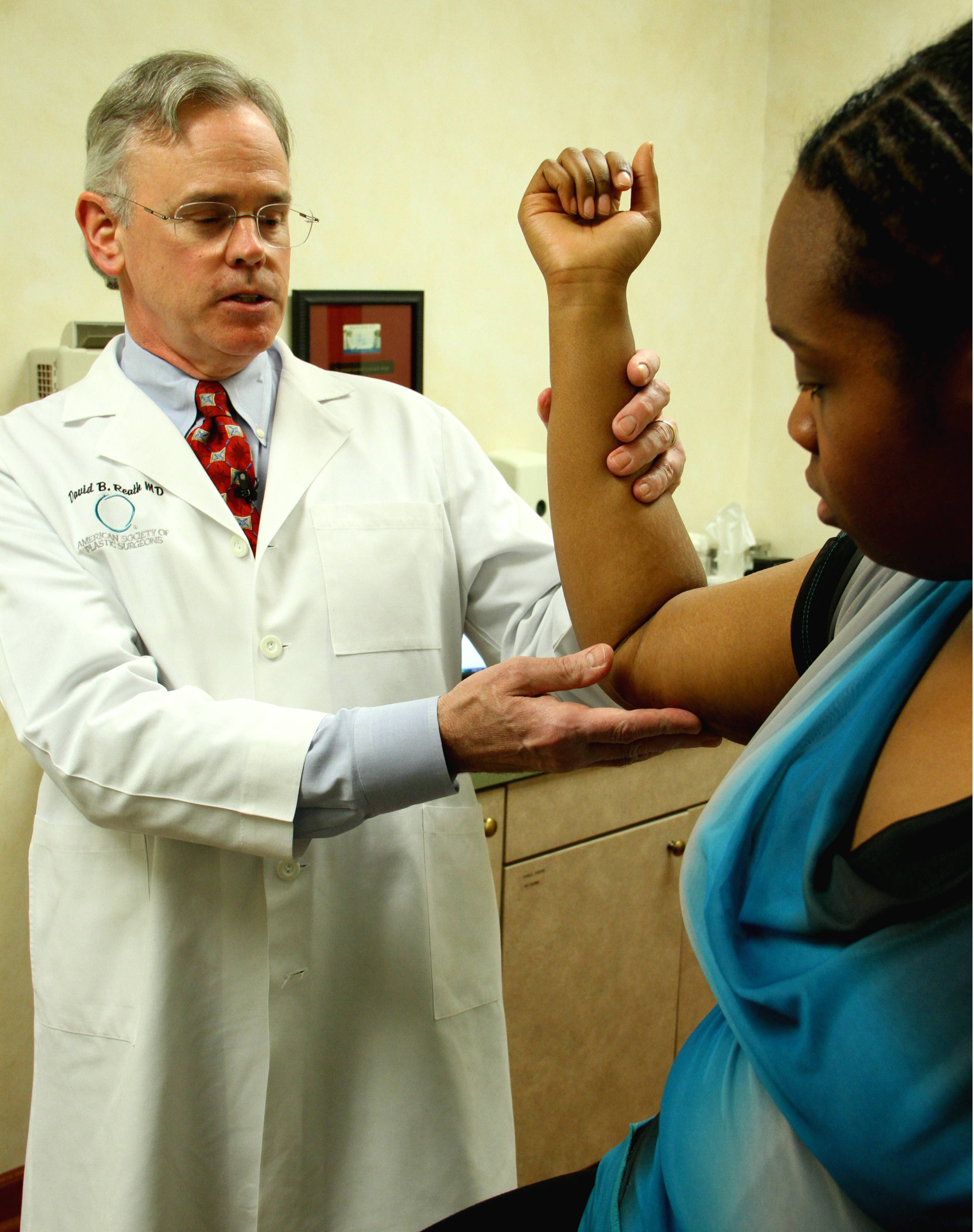